Learn more about events in support of Huntington Society of Canada (HSC) across the country, as well as tips and tricks for your event!

Behind the Paul Paone Memorial 3-on-3 Tournament

From a young age, it was clear that basketball was Paul Paone’s favourite sport.  It was his favourite to watch and play. He was a member of the Westlane Secondary School basketball team, where he was a student from 1991 - 1996. In April 2005, at the young age of 27, Paul was diagnosed with Huntington disease (HD). Although the diagnosis meant things were about to change drastically for Paul and his family, he never lost his love of basketball.

In 2009, members of the Niagara Falls Chapter were inspired by a story about another young man who had held a basketball fundraiser with great success.  The Chapter decided to host their own tournament, and given Paul’s love of basketball, it was the perfect fit. The tournament is at A. N. Meyer Secondary School each year, where students from across the Niagara Falls region fundraise to compete in the tournament.

“It’s a really important education opportunity,” said Judy Harding, Paul’s mother. “So few people know what Huntington disease is, let alone its effects. At the end of the tournament, if that group of young people have a better understanding of HD, then the event was a success.”

Paul shared his mother’s sentiments. He looked forward to attending the tournament every year, not only for the games, but for the opportunity to educate young people, who have little or no understanding of the disease.

Paul sadly passed away in 2015 from Huntington disease. This year’s tournament is in memory of Paul, his journey with HD and his love for basketball. If you would like to support the event, we invite you to make a donation in Paul’s name at www.huntingtonsociety.ca/yes-i-want-to-donate. 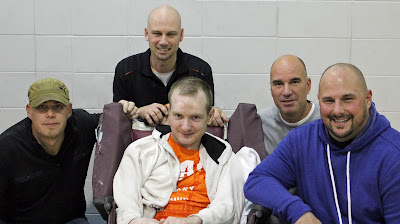 Paul with some friends at the 2014 Tournament

Posted by HSC Events at 9:38 am No comments: Links to this post

HSC Events
HSC aspires to a world free from Huntington Disease (HD). One in every 7,000 Canadians has HD, a devestating, degenerative brain disorder. The symptoms are like having Alzheimer's, Parkinson's and Schizophrenia in one disease. Every child of a parent with HD has a 50% chance of inheriting the disease. There is currently no cure.